I’m not addicted to my phone, or am I? 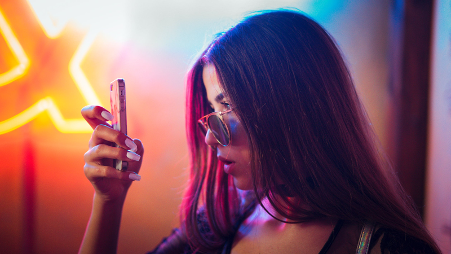 Are we a country of smartphone addicts? The problem is, our devices are designed to keep us engaged. They’re intentionally addicting. But if you understand the tricks that grab your attention, you can learn to have a healthier relationship with your phone.

We think we’re living inside of two billion Truman Shows.

Where, you know, Truman Show, you wake up and everything is sort of coordinated just for you. And you really don’t even realize it, but it’s coordinating just to entertain you, or just to engage you. That’s Tristan Harris, he worked as Google’s design ethicist, and now he runs a nonprofit initiative called Time Well Spent, advocating for awareness of how tech companies profit off of users’ attention. It’s not designed to help us, it’s just designed to keep us hooked.

If Facebook sends you a push notification that a friend is interested in an event near you, they’re essentially acting like a puppet master, leveraging your desire for social connections so that you use the app more.

But notifications didn’t always work like this. When push notifications were first introduced for email on Blackberries in 2003, they were actually seen as a way for you to check your phone less.

You could easily see emails as they came in, so you didn’t have to repeatedly open your phone to refresh an inbox. But today you can get notifications from any app on your phone. So, every time you check it, you get this grab bag of notifications that can make you feel a broad variety of emotions. If it wasn’t random, if it was predictably bad or predictably good, then you would not get addicted. The predictability would take out the addictiveness.

And, it’s effective. Slot machines make more money in the US than baseball, movies, and theme parks combined and they become addictive about 3-4 times faster than other kinds of gambling. Some apps even replicate the process of pulling a slot machine lever with the “pull to refresh” feature. That’s a conscious design choice. Those apps are usually capable of continuously updating content, but the pull action provides an addicting illusion of control over that process.

In the future, we might see healthier ways of delivering notifications. Research shows that bundling notifications, where phones deliver a batch of updates at set times, reduces user stress. Then, you have to grayscale your screen. The easiest way to attract your eye’s attention on a screen is through color. Human eyes are sensitive to warm colors.

In eye-tracking tests like this one, they gravitate, particularly to bright red. That’s why so many apps have redesigned their icons to be brighter, bolder, and warmer over the years. It’s also why notification bubbles are red. A little icon like this, or this, doesn’t have the same impact on your attention as this.But you can neutralize that distracting effect by selecting a grayscale color filter in your phone’s accessibility settings.

When you make everything black and white, your brain isn’t tricked into thinking that this is any more important to you than this. I mean, there’s a reason why slot machines are bright and color and flashing lights and ding ding ding ding ding. They have the sensory input too, right. And so, just noticing that if I take out the color, it changes some of the addictiveness. Finally, restrict your home screen to everyday tools.

Make sure that your home screen, when you unlock it, doesn’t have anything except for the in-the-moment tools that help you live your life.

To get somewhere when you need some help like Maps & Calendar. None of these are apps that you can fall into and then get sucked down some bottomless vortex of stuff. If you’re not sure what counts as a bottomless vortex of stuff, it helps to filter out apps that use infinite scrolling. Unlike pagination, where users have to click to load new content on another page, infinite scrolling continuously loads new material so there’s no built-in endpoint.

Video autoplay works in a similar way. These interfaces create a frictionless experience, but they also create a user’s sense of control and make it harder to stop. Research shows that people rely on visual cues more than internal cues to stop consuming something. In a 2005 study, individuals who ate soup out of a self-refilling bowl ate 73% more than those who ate out of a normal bowl filled up by servers.

But those who ate from the self-refilling bowl didn’t feel any more satisfied.

So, a visual cue, like an endpoint, is better at telling you the right time to stop than your own sense of satisfaction. And because so many apps don’t have an endpoint, you have to build your home screen around the eventuality of distraction. We check our phones a lot. Most of us drastically underestimate how often we do so. But technology might not always look this way.

There are ideas for alternative interfaces that give you functional choices and are more transparent about how much time you’ll lose with one action, versus another. But it’s a really deep philosophical question: what is genuinely worth your attention? On an interruptive basis? Do people even know how to answer that question? It’s a really hard question, it’s not something we think about.

But, for now, it’s a question that everybody needs to start asking.

Facebook dynamic ads automatically present the appropriate products to users who have shown an interest in your website, app, or elsewhere online. Personalized advertisement can improve the cost-efficiency of your online advertisement and increase the engagement rate. However, some business owners still do not know what Facebook dynamic ads are and how to start them.

CDN is an abbreviation for the content delivery network. One of the biggest eCommerce companies, Shopify also employs this CDN system.