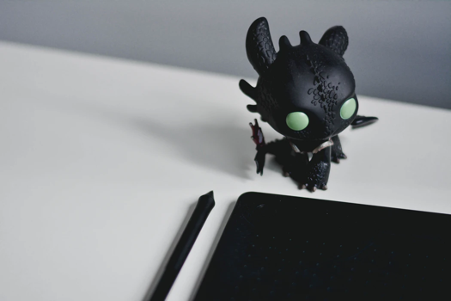 I’m going to elaborate on the five different types of animation and show you some cool examples of each of them.

We’ll start off with traditional animation, you might call it 2D animation, but actually, place 2D in a different category, and you’ll read why later in this article.

Traditional animation sometimes referred to as cell animation, is one of the older forms of animation. In it, the animator draws every frame to create the animation sequence, just like they used to do in the old days at Disney. If you ever had one of those flipbooks when you were a kid, you know what I mean. Sequential drawings screen quickly one after another, creating the illusion of movement. Traditional animation consists of hand drawings called frames.

In the past, the drawing occurred on a big light table, which is basically a drafting table with a big light panel in the middle of it, on which the animator drew the sequence.

The light enabled the animator to see his previous drawings through the paper to get a better look of his animation, this is called onion skinning. 2D or traditional animation is usually animated at 12 frames per second with occasional faster action animation at 24 frames per second. Japanese animation, however, is known to be animated at a lower frame rate in most cases.

2D animation in its own category

The reason we placed 2D animation in a different category is that in addition to the option of animating frame by frame, an animator has an option of creating rigs for the characters, and then moving the body parts individually, instead of drawing the character over and over again.

3D animation is not traditional

3D animation, however, works in a completely different way than traditional animation. They both require an understanding of the same principles of movement and composition, but the technical skillset is very different for each task.

Like we mentioned before, while in the past you had to be an amazing draftsman to be an animator, with computer animation that is not the case. 3D animation is more similar to playing with puppets, rather than drawing. The animator moves the character in a 3D program with special controls that are connected to each body part, such as hands, elbows, lips, etc., and then sets a keyframe when all the body parts are in the right position. They proceed to move forward in time and move all these controls again to create another keyframe.

The computer then calculates the journey the body parts are going through between each of those keyframes.

The 3D animator will spend most of their time looking at curves that represent the movement of different body parts over time. Another big difference with 3D animation is that, unlike traditional animation, the character’s body parts are always present and should be taken into consideration, let me explain. When animated in 2D, the character has to be drawn for every frame.

When the character is viewed from the side, half of its body isn’t showing and thus isn’t drawn. It technically does not exist. It’s drawn on a flat page and there really isn’t more to the character other than what the animator draws. With 3D though, the character’s body parts always exist in the shot. Even when one hand isn’t visible, it’s still there. That adds some work for the animator since we need to be aware of the entire character at all times. The last major difference with 3D animation is the frame rate. Like I said before, traditional animators usually work on two’s, which means they draw a new drawing every two frames and thus having one drawing last for two frames. With 3D animation, however, the motion is always smooth except for stylized pieces, which intentionally try to look different. Having a character stop completely looks like a mistake in 3D. Even when the character is standing still, there should always be some signs of life. This is something 2D animation can get away with much more easily than 3D.

Number four on our list is motion graphics. While still considered a form of animation, motion graphics is rather different from the other types of animation on the list, mostly because unlike the other types, it is not character or story-driven. It is the art of creatively moving graphic elements or text, usually for commercial or promotional purposes. Think animated logos, explainer videos, app commercials, television promos, or even film opening titles.

The skills for motion graphics don’t necessarily translate to the other types of animation, since they don’t require knowledge of body mechanics or acting, but they do have some attributes in common, such as understanding good composition, and the all-important camera motion.

Last but not least, is stop motion. Stop motion is a special form of animation that combines live-action film-making principles with traditional character animation. Stop motion is done by taking a photo of an object, and then moving it just a little bit, and taking another photo. The process is then repeated, and when the photos are played back one after another, they give the illusion of movement.

This is similar to traditional animation but uses real-life material instead of drawings. Let’s look at some different styles of stop motion. One of the most popular forms is claymation, working with clay or Play-doh characters that can easily be manipulated for animation. Advanced claymation, as seen in the Neverhood or Armikrog, uses the metal skeletons on which the clay is then molded for more sturdy rigs. Some animators would use regular puppets instead of clay ones, usually also built upon some sort of skeletal rig. The faces of the characters can be replaced based on the expressions or be controlled within the rig. Another popular form of stop motion is cut-out, using construction paper or cardboard characters and placing them on paper while shooting the animation from above.

That’s how South Park was originally made before they switched to computers. Similar to cut-out animation, silhouette animation uses cardboard or some kind of flat material, but the objects are all dark, and the shot is depicted with silhouettes only. This is one of the oldest forms of stop motions and is rarely used today.

Some use action figures or Lego characters for animation. This genre is very popular on Youtube, with many channels dedicated to creating funny skits with Lego characters. Robot Chicken is a great example of that, they use famous action figures to make fun of pop culture. Then there’s pixelation, a form of stop motion that uses real people and real environments to create unreal videos. It uses the stop motion method of taking a still photo, moving things around, and then taking another photo, but the subject matter is usually real people instead of puppets.

Alright, so now you know all about the different types of animation.